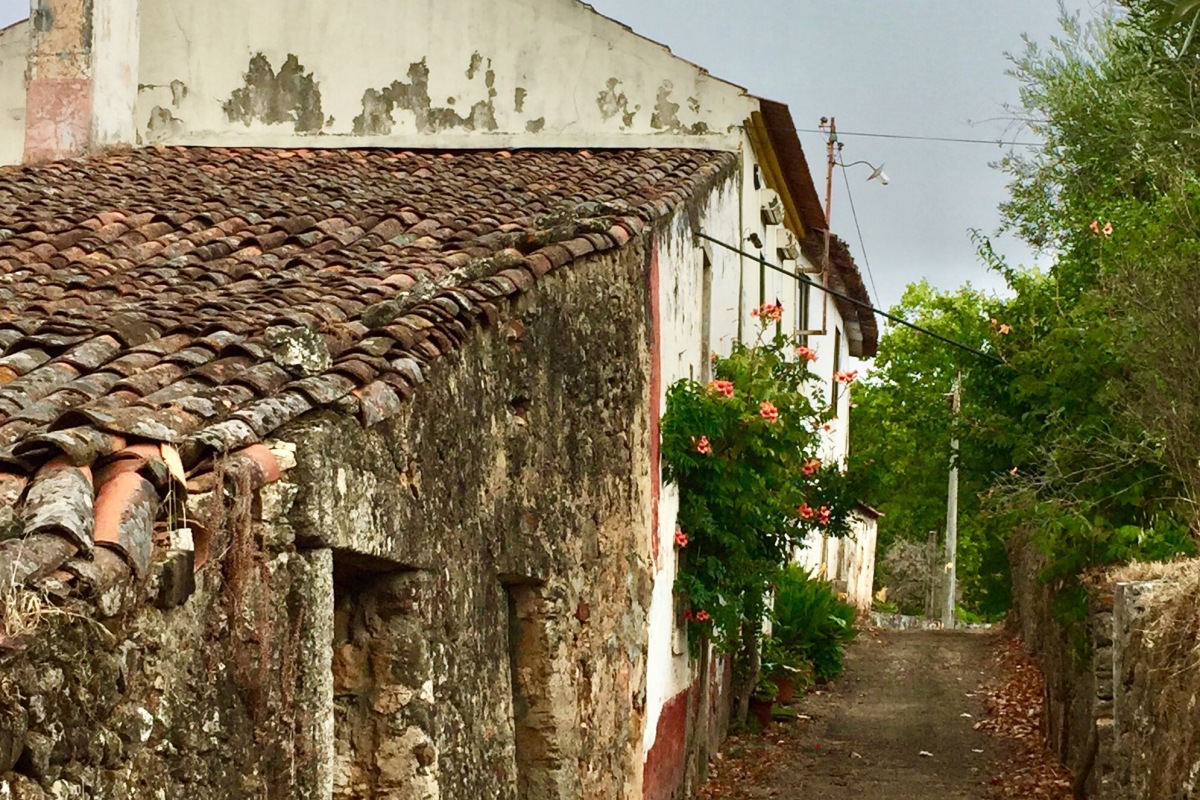 Inertia: “a property of matter by which it continues in its existing state of rest… unless that state is changed by an external force.” That was my problem last Monday morning. I’d had a day of rest in Tomar – if 6 miles of walking through a town vs. 18 miles of walking cross-country can be called rest – but now I needed the external force to start up again. I also had some personal business to attend to – life does go on – and to take a package to the Correios, the post office. Then I had to deal with the inertia problem. I did it by violating a personal code for the Camino.
Across a plaza from the Correios was a taxi stand, and since I’d already frittered away two hours of valuable walking time, I hired a taxi to take me six miles down the Camino. When I got out and finally started walking, I felt bad, but only for a minute. The path was a long uphill, and as I was hitting my stride, the guilt just evaporated.

By this time – mid morning – the heat was already building into what I knew would be a scorcher for a long daily stage, all of which was going to lift us nearly 1,000 feet (310 meters) in elevation to higher ground. That translates to a day of solid climbing. I say “us” very generously since I was alone and saw no one for most of the day. My approach to climbing is to go slowly and steadily, stopping to rest in place when my body asks for that, and stopping fully – pack off and sit or lie down to take the weight off my feet – for at least 5 minutes every hour. Obviously, because of the heat, water intake is critical too, and that means water needs to be added to your pack. A downside of this Camino up to this point has been the inadequacy of water replenishment opportunities. Consequently you have to carry as much water as you reasonably can; its heavy, and that slows you down. But you don’t care about that like the Camino pilgrims do. “Where’s the good part?” you ask.

Hold on, I’ll get to it. I’m going at my routine uphill pace, take a few photos of scenes I like and think you might too. There are a few spectacular flowers to capture, a photogenic farm or two, and lots of olive groves. I adhere to my rest discipline and the day is pretty uneventful. 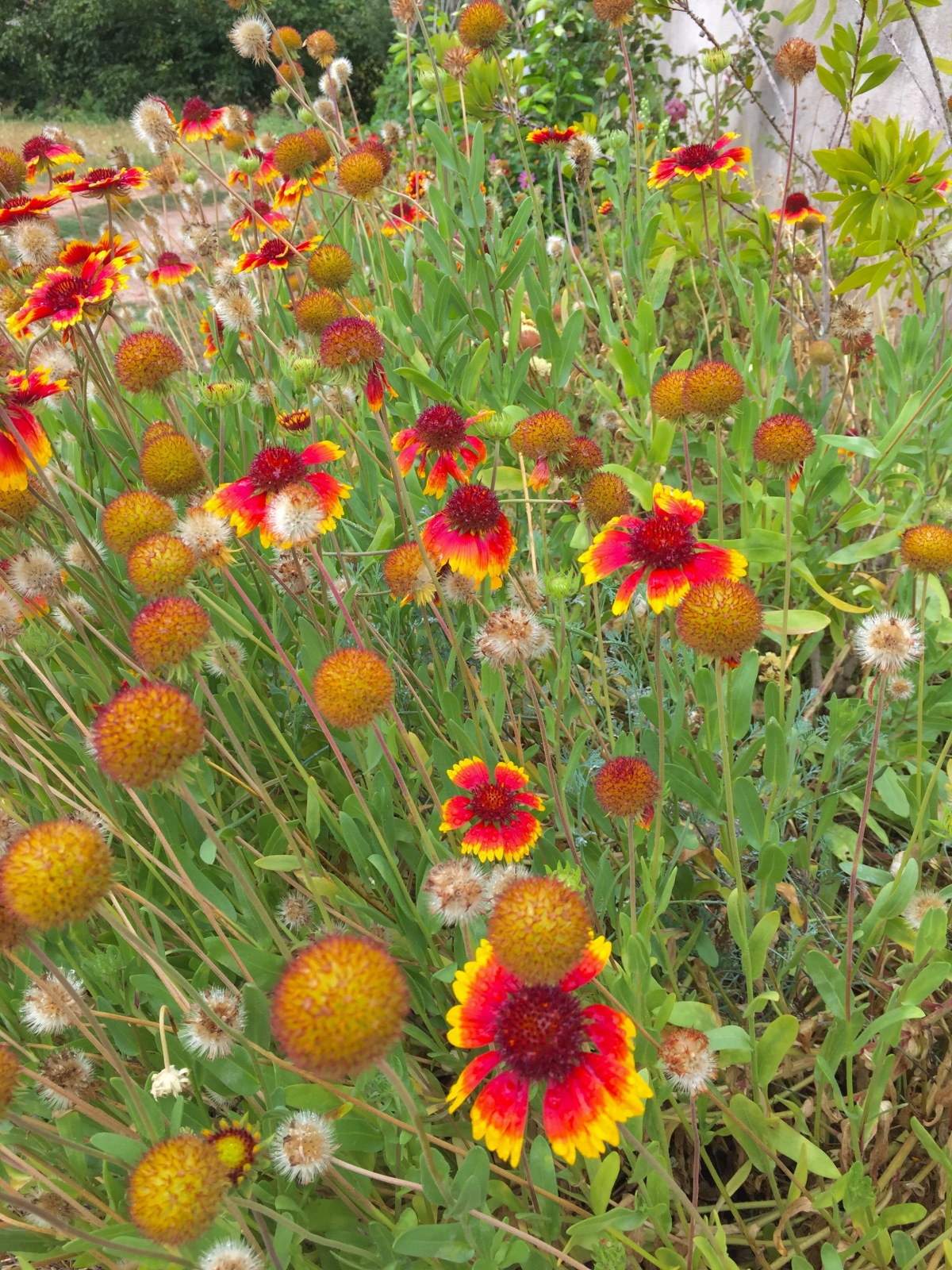 As I’m getting up from one of my rests, leaning against a sturdy olive tree, another pilgrim comes by – my first sighting of the day- and we exchange greetings. She’s Michelle from Lake Tahoe, CA and she just started walking today. We’re western neighbors of sorts, so she holds back till I’m strapped up again and we walk and talk for a while. She mentions that she’s out of water. The gentlemanly thing to do would be to offer her some of mine, but we’re talking self-preservation here and I’m running low too. We walk a bit further. Now there’s a very scenic image on the left side of the road we’re on, a beautiful old farmhouse with a pomegranate tree in front and beautiful bluish-purple lilies next to it. I stop to take a photo; she stops too, a few feet away. Suddenly we hear the most beautiful British voice asking, “Would you like some WAHHTER?” Indeed so, we would, especially the dehydrated Michelle on her very first day on the Camino. Next thing we knew, the voice appeared at the door of the house, inviting us to “please, do come in,” and it belonged to a vivaciously attractive young woman, Alex Atkinson, barefooted in a painter’s smock, with white paint-stained hands. She leads us into a kitchen that is a work in progress and invites us to take off our packs. Not only is she serving us “wahhter,” but it’s been upgraded to apple juice… with ice (I mean we’re both Americans; we prefer our drinks with ice). Michelle then mentions my British friends, Mary and Paul – who I wasn’t sure were able to go on due to his ailing knee – and she says they’re not far behind her. At this point I go back out to the road to leave them a note to come stop by this house, there’s a surprise for them. Just at that moment, Mary appears and Paul not far behind her. She’s surprised to see me, especially as I’m standing inside a farmyard without a pack. They follow me in and are greeted warmly by Alex’s two dogs and then Alex and Michelle who are chatting in the kitchen. Now there are five of us standing and drinking apple juice on a blazing hot afternoon, three Brits and two Americans. Alex breezily tells us her story – well, there must be more, but she tells us the story of this house and how she acquired it and what her vision for it is. She calls it The Little Olive Quinta, using a common Portuguese word for farm. Then she tours us through each of the old house’s many rooms, each of which is very much still in process of renovation, but she’s doing most of it alone, hiring tradesmen only as needed. She tells us her neighbors are friendly and helpful but most think she’s crazy to be undertaking such a project alone. She jokes about her dream vision of a future husband – just the right man – walking along the Camino right in front of her house. It could happen some day, but not this day. Yet, we had the most delightfully surprising hour-long interlude on a hot long walk down the road. It ended in her cellar with all of us – including the non-imbibing Mary and Paul – sipping the smoothest port wine that has ever landed on my tongue. It happened to be Paul’s 60th birthday, and I imagined he’d remember  this one. After exchanging contact information, we were off; our destination was still a good distance away. 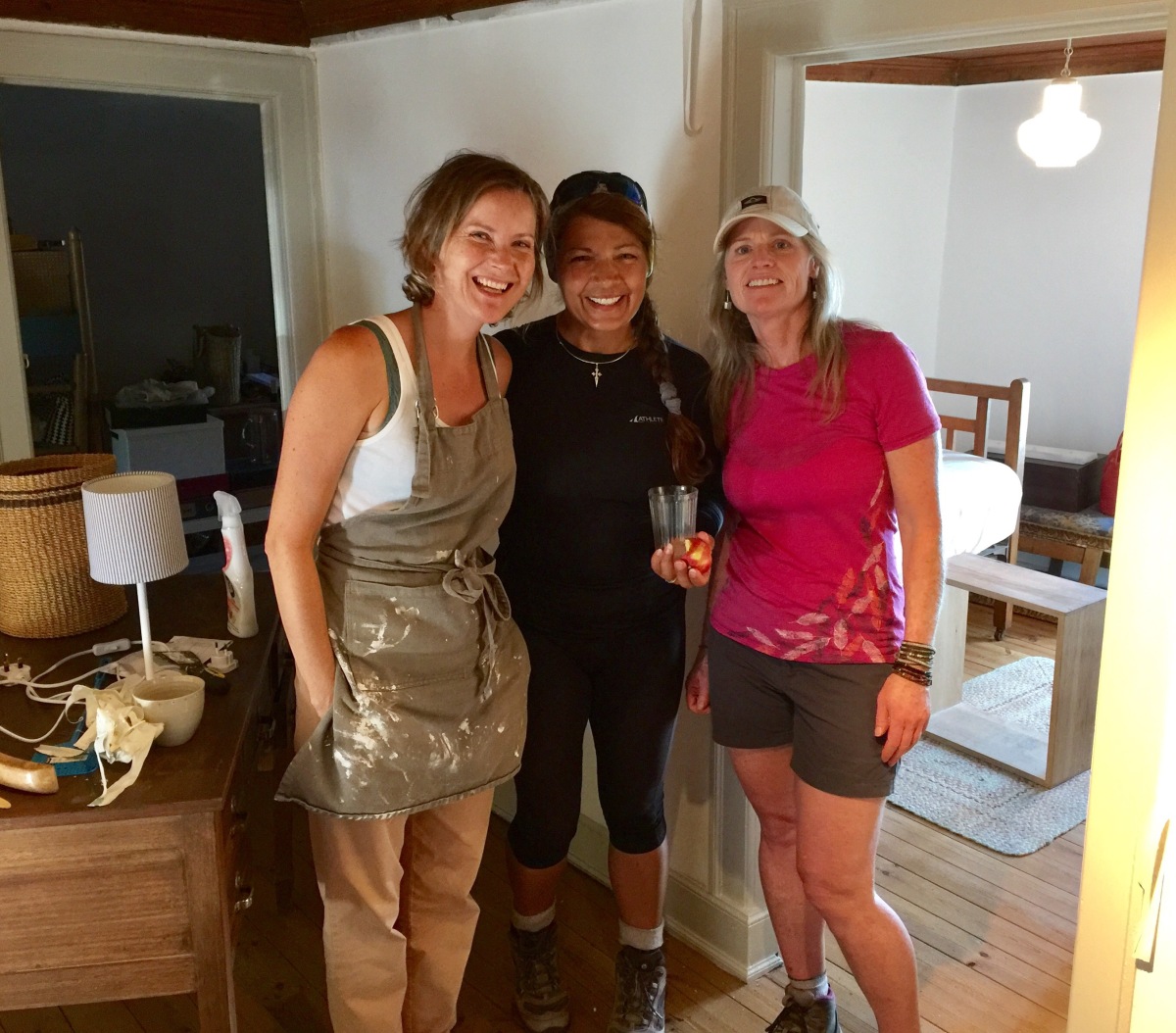 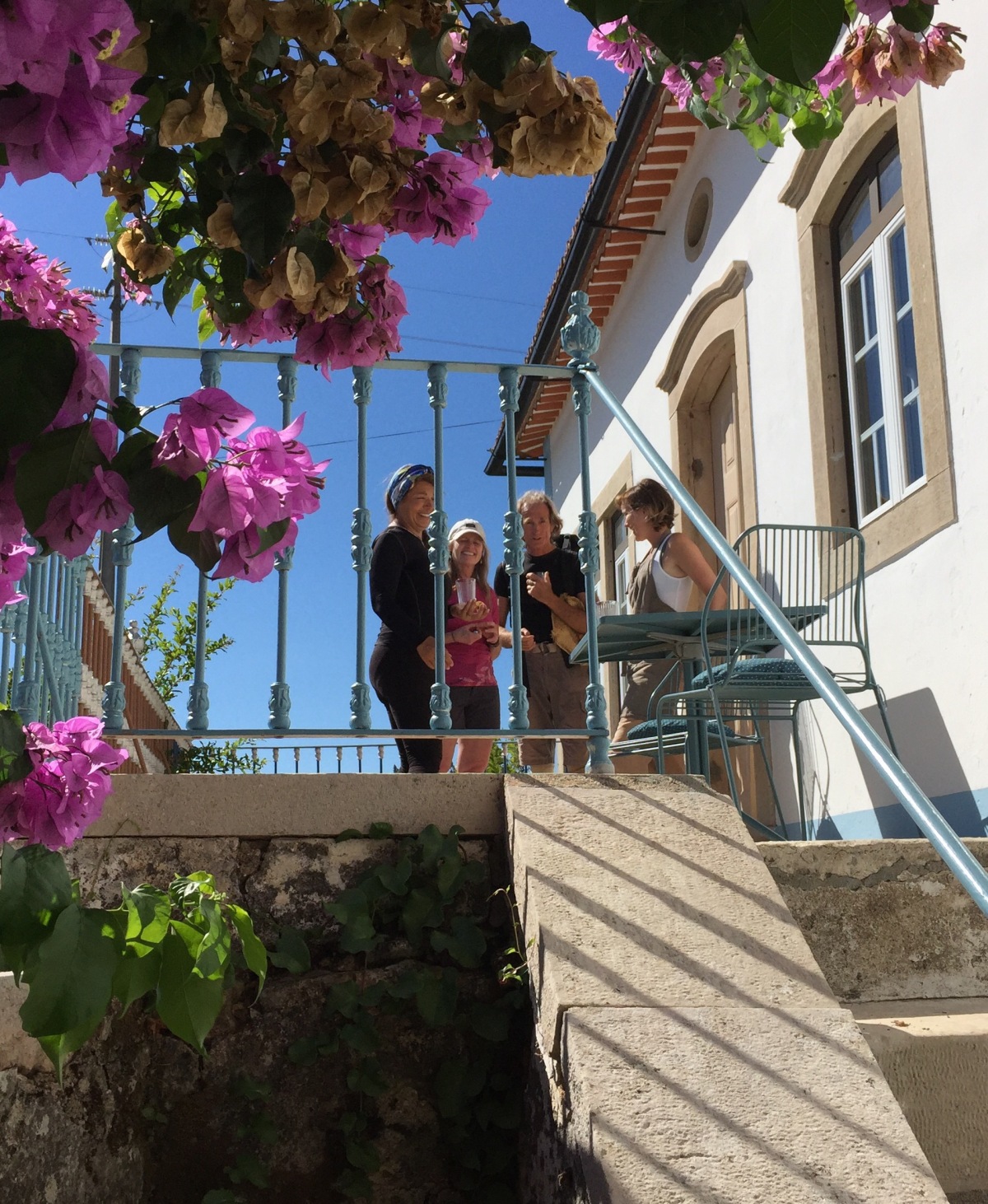 Perhaps within a mile from Alex’s we heard another British voice – this one a bit more gravelly – coming from a house by the side of the road. Her name was Lynn, and she was what Paul called a “Brummie,” a native of Birmingham, England. She’d owned her place for longer than Alex, but she too was working to restore it, only at a slower pace and with questionable help. She also offered us refreshments, the Brits chatted, and then we moved on again.

Our destination finally came into sight and caused us all to scratch our heads. Alvaiazere was an out-of-place upscale mountain region community with wide boulevards, highly-stylized public fixtures such as street lights and even recycling bins. Homes were large, architectural gems, and mostly unlived in at that moment. One very wide boulevard, with parallel parking spaces to boot – but zero cars – seemingly went up a steep hill only to a monument that we didn’t visit, and it appeared no one else did either. What began with a sluggish start, was then a was a rather boring uphill slog, turned into an afternoon of the most pleasant and finally puzzling surprises. Would more be in store?

12 thoughts on “Slow start leads to a refreshing surprise” 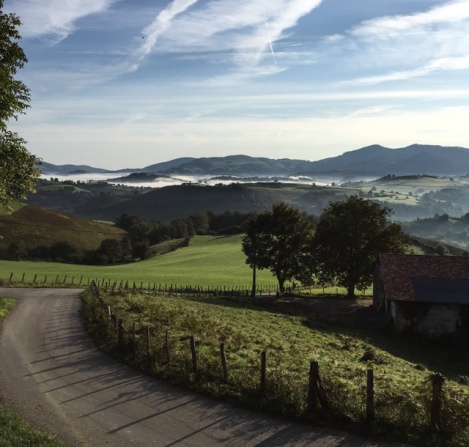 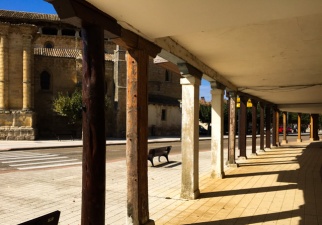 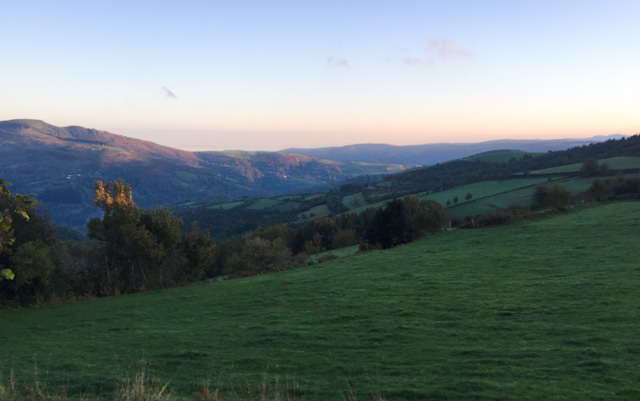